No products in the cart.

In the measured count of time, it is only a short period since the destinies of George Kaiser and his wife were molded by a vision back in 1919. Man and wife, they were, building their hopes for the future on a modest candy store. It may have been the irresistible homemade candies, or it may have been the warm hospitality that brought so many lovers of sweets to the first Parkside Candy Shoppe, at Main Street and Oakwood Avenue in Buffalo, NY. Many came, few chairs were empty.

Then the vision of a royal, spacious shoppe began to materialize. In 1927, a modern building, classic in design was built at the corner of Main Street and Winspear Avenue. The oval interior of the store and dining area was designed by Buffalo architect Morton Wolfe, finished in the style of the Adam’s period. Still today, the interior features a beautiful solid walnut soda fountain, tables, and candy cases. In the center of the store are the original three light fixtures which not only help light the store, but also assist in the heating and cooling. In the rear of the store, there sits a romantic booth where a number of marriage proposals have been made. On the backside wall, the original Kaiser Family farm picture still hangs. The interior and exterior of the store was recently refurbished in 2017, and was recognized by the Federal Government and New York State as a National Historic Landmark. But, equally important, the delicious quality chocolates, ice cream and sandwiches that made Parkside a tradition still continues. 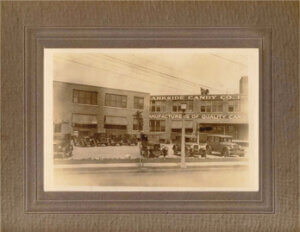 Their vision also continued directly behind the Parkside Candy Shoppe. The Parkside Candy factory was built in two stages by George W. Butler Company. The first stage of the factory was built in 1927, the same year the store was constructed. In 1938, an addition was added which doubled the production capabilities of the factory. The production allowed Parkside to keep pace with the growing demand for it’s delicious candy.

In 1981, Philip Buffamonte purchased Parkside Candy from the George Kaiser Estate, and a new-era began with the expansion to its current retail locations. Today, the Parkside Factory manufactures a complete line of delicious chocolates along with other sweet treats. Its three most popular products, Sponge Candy, Lollipops, and Taffy are sold wholesale throughout the Northeastern United States. If you travel to Lake George, Cape Cod and the Jersey Shore, you will find these items in many amusement parks, fudge shops, and candy stores. At Christmas, Valentine’s Day and Easter, the Parkside Factory gears itself to the production of seasonal candies packaged for the corresponding holiday season. All of Parkside’s products are available to be purchased online at parksidecandy.com or at any of our six retail stores.

In 1983, Parkside Candy made its silver screen debut in the film “The Natural”, starring Robert Redford and Glenn Close. The director used the original store to shoot various movie scenes. Store furniture from the Main Street location was used in filming “The Natural”. If you look closely, Parkside Candy workers, such as Annmarie Ranger, were extras in the film. Buffalo was the background they needed to recapture the spirit of the 1930s. Other sites included the Ellicott Square Building, old War Memorial Stadium and All-High Stadium.

It is with continued hard work, dedication, and vision that the Parkside Candy Company will uphold the tradition of providing its delicious quality chocolates to future generations.

Head over to Corporate Gifts & Baskets for even m0re Christmas and end of year gift items!

Curbside pickup is available at all locations!
Please call to place your order.

Contact Information can be found on the Store Locations Page.

Our retail stores are also open for business.